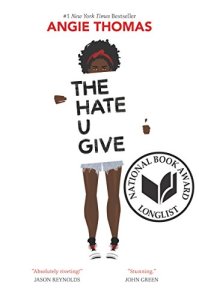 In her book The Hate U Give, debut author Angie Thomas takes readers into the heart of the urban black community to explore the experience of sixteen-year-old Starr, the only witness to the shooting of her friend by a white police officer. It is hard to walk away from the book without having learned something thanks to Thomas’s “unapologetically black” first-person narration by Starr, vibrant world-building, and willingness to confront complex issues with humor and forgiveness. It is impossible to read the book without examining your own thoughts about race and justice.

The story opens with Starr attending a spring break party where “a haze lingers over the room, smelling like weed, and music rattles the floor”; soon people are Nae-Nae-ing in “their freshest kicks and sagging pants.” Starr relates all of this and her mixed feelings about being at the party—including “feeling basic as hell” in comparison to some of the other girls—with salty language and slang.

Wait, I thought, feeling discomfort well up in the back of my throat, isn’t this a bit stereotypical?

According to Thomas: yes. And no.

She explains in an interview with The Cut:

Thomas uses the book to challenge other assumptions and beliefs as well. Although Starr’s childhood friend Khalil sold drugs, he was a kind person who didn’t deserve to be shot and killed. His mother, a crack addict who at best neglected Khalil and at worst endangered his life by setting him up to deal drugs, is still deserving of compassion after his death.

In fact, there are a lot of “lessons” that Starr and other characters learn during the story, some more successfully than others. For example, although the vital importance of empathy is a central theme of the book, the police officer’s father is ridiculed and disregarded when he appears on a TV talk show and shares his pain and fear for his son after the shooting.

In another scene, Starr and her black friends tease Starr’s white boyfriend about thinking mac n’ cheese is an entree rather than a side dish; yet, his discomfort at being “other” is not recognized by Starr, who must “code-switch” when she transitions between her black neighborhood and mostly white school. Underlying all of this is power: who has it, who doesn’t, whether the perception is right or not. How do we laugh and joke about our differences in a way that doesn’t cause hurt or alienation?

It’s Thomas’s inclusion of the kitchen sink of issues that made the book feel like an ABC Afterschool Special at times. In addition to the plot of Khalil’s shooting at the hand of a white officer, Starr must confront the racism of a friend; dates a white boy; is threatened by a local drug lord; has a parent who was in jail; saw her cousin gunned down in a drive-by shooting; and shares a half-brother with a good friend, to name a few.

While perhaps heavy handed, these plot threads do create many opportunities for discussion at a book club or school event. Perhaps it is time to retire The Catcher in the Rye as required reading in high school and substitute The Hate U Give instead? As a country, we can only benefit by opening ourselves up to hearing the experiences and feelings of people who are different from us—or, to providing a vehicle where young adults can recognize themselves—and trying to come together to give love instead of hate.

Disclosure: The links below are affiliate links, meaning, at no cost to you, I will earn a commission if you click through and make a purchase.

Red’s Blended Book Views is a participant in the Amazon Services LLC Associates Program, an affiliate advertising program designed to provide a means for sites to earn advertising fees by advertising and linking to amazon.com.