**Warning: Review includes spoilers for previous books in the series.** 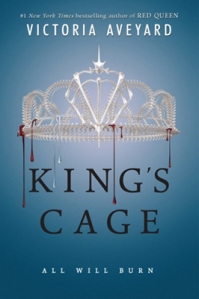 King’s Cage, the third book in Victoria Aveyard’s Red Queen series, continues the story of Mare Barrow, a reluctant heroine who became the face of the Red bloods’ rebellion against the aristocratic Silver bloods and their X-Men-like powers. With Mare in captivity, her ability to harness lightning smothered by Silent Stone, it is up to her allies—lovelorn Cal, determined Farley—to continue the fight and find a way to free her. The book is largely a set-up for the grand finale, War Storm, set for release in May 2018. Still, there are enough surprises and shifting perspectives to make for an enjoyable read.

By this point in the story, we have been away from King Maven, Mare’s former betrothed, for long enough to wonder what exactly is happening in his twisted and devious mind, besides his apparent obsession with Mare. Aveyard uses Mare’s capture to bring us back with her into his grasp, showing us what drives Maven, how much he is capable of, and also some of his weaknesses. Their game of cat-and-mouse is mental and emotional, allowing for plenty of tension but not a tremendous amount of action. Aveyard lingers in this plot point just long enough—maybe a dash too long—before amping up the action again.

While Mare is away, Aveyard keeps us entertained with other narrators. In addition to Mare, there are also chapters written from the perspective of Cameron, the Newblood whose ability is to silence others’ abilities, and Evangeline, the dreadful mean girl who was once Cal’s betrothed and now Maven’s. It was fun to see Mare through Cameron’s eyes (let’s just say she’s not a fan of Mare) and keep a toe, so to speak, with the rebellion and their ongoing efforts. Similarly, Evangeline’s narration allows us to keep up with important plot developments happening in the Silver camp.

I wondered at first at the choice of Cameron for a narrator. I mean, she’s a relatively minor character.  Why not Cal or Farley? But the answer becomes clear in short order. Between Cal’s shifting allegiances and Farley’s “need to know basis” leadership style, peeking in their heads would reveal too much.

Fans of Mare’s romance with Cal are finally rewarded in this book. In the quiet before another storm, they draw closer together and give free rein to their feelings. Of course, I did mention that King’s Cage is largely a set-up for the finale, and their relationship is bound to be tested even more severely as the story continues.

The other aspect of the book that was both interesting and frustrating at times were the political machinations of all the various players. We are held on the edge of our seats as each one jockeys for position, but to be honest, I got lost sometimes trying to remember who was who, especially with some of the minor Silver characters and the characters from other countries (Piedmont is a country, right…?). This is one of those series that may need to be re-read before the release of War Storm in May.

If you are like me, you may have thought the writing was a little rough in the first book. My suggestion: stick with it. This is a fun series with interesting characters that will keep you reading well past your school night bedtime.

(Disclosure: The links below are affiliate links, meaning, at no cost to you, I will earn a commission if you click through and make a purchase.)

Other titles in the series:

Red’s Blended Book Views is a participant in the Amazon Services LLC Associates Program, an affiliate advertising program designed to provide a means for sites to earn advertising fees by advertising and linking to amazon.com.